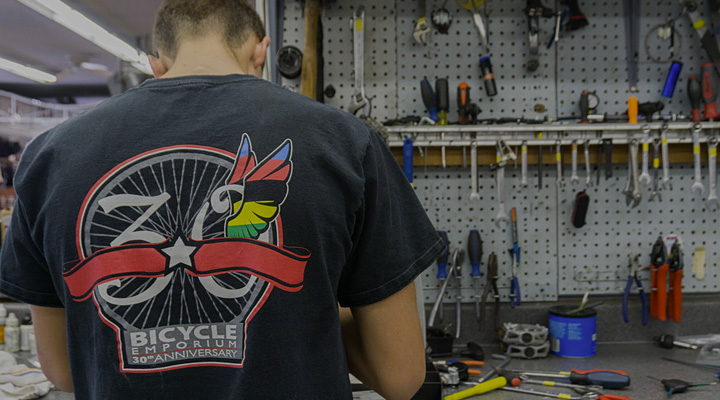 Choose Bicycle Emporium for your Bike Service needs as our Mechanics are highly experienced and Certified in maintaining your high end gear all the way down to your kid’s bikes.

What Our Customers Are Saying

“Hi Bill, I just wanted to take some time to let you know (of course you probably already know) what an amazing team you have at Bicycle Emporium. I came to pick up my bike and bike rack with a plan to hit the trail immediately after. Again, friendly, great service…Billy helped me put the bike rack on my car (it only fell off once on the way to the River – haha just kidding). My bike didn’t really fit on the rack but he new the fix – an extender bar – and wa-la, bike on the rack. I went over to hit the trail and was wondering what the ride was going to be like. In the past after I’ve picked up my bike at other shops, I’ve had a loose crank, shifting out of adjustment, and I forget what else. But my bike felt like new. I could tell a big difference in smooth shifting (and yes duh lol bent chain ring). Sooo, to sum it up, you have a great thing going on up there, a great team. Even the people that I didn’t have interaction with, were friendly with the other customers (yes, I was watching 😎 , and all your employees just appeared happy. How is it that EVERYONE in there is friendly and great customer service? Whatever it is, great job and thanks for everything. Ciao!”

We’ve sold several E 64 bikes this season and customers just keep telling me how fun it is to ride again at a higher level.  Gilbert writes: Hello Bill, I bought the Colnago E64 this week from you.  Took it out for a serious ride yesterday.  WOW ….. IT IS AMAZING!  I am telling you […]

How It All Started

A few years ago back in 1969 I was introduced to the joy of cycling. I had just opened my eyes on Christmas morning and there it was; a brand new two speed kick back stingray parked right there under the tree with my name on it. Wow!  A gold metal flake Stingray from Santa, it was almost too much to handle.  I rode down my street with such pride. Today I can do just the same on my Colnago 55th Anniversary Bike which I just purchased this year. I was almost as excited unpacking this beautiful Colnago as I was when I was 7 cruising my Stingray. I’ve been a bicycle guy all my life really, so it was a natural fit that in 1985 I decided Auburn needed a new bike shop and bingo –  Bicycle Emporium opened its doors.

I had worked at Franks Bicycle Lane in Roseville for most of my high school years.  I was like most teenagers then, sports, girls and a cool Firebird hotrod car but bicycles were always my passion.  Frank Palacios, my boss, became a father figure and taught me many values including the importance of the customer. The manager at Franks, Tony Asebedo, took me in and taught me the ropes of the business. To this day, I am very grateful to both of them and happy to call them lifelong friends.

I also had the opportunity to work for a distribution company in Santa Rosa for a few years, this taught me many values in the world of cycling and I made many lifelong relationships in the industry. It is there that I meet Clay Akey, who eventually became my business partner.  Clay and I worked together at Pedal Pusher.  After these years in the business, the next step was to open my own.

As a young businessman it was fun, I seemed to have more time back then to involve myself in the Auburn Chamber of Commerce, the Lyons Club, and many other community organizations.  It was an exciting time when we organized and promoted the Gold Country Criterium Bicycle Race – those were the days!  I owe a big thanks to the late Ralph Swann; he was very instrumental with the race. Also my printing partner and drinking buddy Brad Weston, of Auburn Printers for getting the race info out and printing posters and flyers. We just made stuff happen back then!  It was always work but felt like fun. Mark Faulkner, now a very popular teacher at Placer High, was my right hand man in those days. We soon put Carter Schmeck to work, another popular figure of Auburn who now runs a company called Mobile Rock.  Over the years I have built many relationships throughout the industry and have learned a ton from my “time in the saddle”.

In the beginning, I had the rare opportunity to meet a fine gentleman that shaped how I did business then and now.  I was lucky enough to meet the original U.S. Colnago Bicycles Importer, Marcel Calborn (aka Papa Celo). I had sold many Italian pro bikes back at Franks Bicycle Lane, but to sell Colnago out of my shop? I wasn’t sure I could sell bicycles as high end as Colnago in the Auburn area then.  But, I took a risk (as a new, small business) and began stocking these high end bicycles.  In 1985 if you retailed a bike at $2100.00 in Auburn you were considered criminal!  However, we must have shown off the quality of these bicycles pretty well along with my passion for Italian design. To this day as I write this some 25 years later, I continue to be a proud Colnago dealer.  I have no doubt Ernesto designs the finest bicycles on the planet.  I consider Ernesto, Paulo (his brother), and Paulo’s son Alessandro Colnago my friends and business partners. To this I am very proud.

Then In 1996 an old friend of mine Clay Akey and I decided we could do a great job with a retail store chain. I mentioned above we worked together in Santa Rosa at Pedal Pusher and now he purchased Cambria Bicycle Outfitter.  He now had the mail order prices and inventory and I had the retail knowledge.  With a huge selection and low, low pricing we decided to give it a go.  So we incorporated our companies to form Cambria  Bicycle Emporium. This partnership enabled us to provide our customers with the best selection and lowest pricing around. We ran three stores with many employees and a zillion cool bike products. I had a great manger to relocate to the Santa Rosa area, Dan Tebbs, and a host of today’s cycling industry people working with us including Jeff Stoudt, now a manager in Petaluma at Mikes Bikes; Andrea Condry managing Camelbak; Chris Costello now running Formula brake and the Hive. Wow, we sure had a super team of people with cycling in their blood working with us

While all of this was happening, I was new to fatherhood and Clay was headed that way too.  So after five or so years into the partnership and a few kids later, we realized that our goals had been met and our future priorities had changed.  Although we still maintain a great working relationship, Cambria Bicycle Emporium became once again, Bicycle Emporium.  We took a good look at our history and realized the value of that.  We now celebrate our ability to provide the finest bicycles and accessories to our customers without having to “rule the (cycling) world”. And we have way more time to ride….and that as you know is truly priceless.

Now that the new world of high tech phones and computers seems to have inundated the landscape, I have a great sense of joy knowing a simple mechanical design like the bicycle can reach so many people today and the numbers just keep growing. Go out and ride, see the world by bike you’ll be a happy healthier person for it.

Thank you for taking the time to learn more about Bicycle Emporium, myself, and some of the things that made the shop what it is today.  Hope to see you in the store real soon or perhaps on a ride (check our ride schedule and join us!)

Choose Bicycle Emporium for your Bike Service needs as our Mechanics are highly experienced and Certified in maintaining your high end gear all the way down to your kid’s bikes.

What Our Customers Are Saying

“I really wanted the new 2018 Colnago V2-R disc, but it wasn’t going to be available for months. Bill wisely encouraged me to wait for the disc frameset and not get the rim break version. I am glad he talked me into waiting because I love the disc breaks on the V2-R. This is an amazing bike and Bill and the team did an amazing job on the build, with great attention to detail to make the build super clean. Thanks a ton.”

We’ve sold several E 64 bikes this season and customers just keep telling me how fun it is to ride again at a higher level.  Gilbert writes: Hello Bill, I bought the Colnago E64 this week from you.  Took it out for a serious ride yesterday.  WOW ….. IT IS AMAZING!  I am telling you […]